The freezer is a great place to store certain vegetables and meats as they last forever (long enough). A lot of you have probably heard that frozen vegetables are worse than fresh, this is actually incorrect. Fresh vegetables and fruits are picked up to a week before ripening and then sit on trucks and in produce aisles until they appear ready, but are in fact far from it. Plant structures store nearly all of their nutrients in the last few days of ripening. Frozen vegetables on the other hand are picked at their peak and flash frozen. This gives you the best tasting, most nutritious product. This is not to say that you should only use frozen vegetables. There is one drawback: texture. You see, all those ice crystals really destroy the cell walls of plants, which makes them mushy when thawed. This can be a good thing, it just depends on the recipe.

PEAS: Frozen peas are an extremely versatile addition to your freezer. A good bag of frozen peas will feel kind of like a cold beanie baby, that is, all the peas will be separate. Big, stuck together chunks in your frozen vegetables is a sign that they were improperly frozen, or allowed to thaw and re-freeze slowly. Either way the quality will be greatly diminished (they will taste like garbage). I feel like a lot of people are wary of peas. I think it’s because they’ve only ever had a crappy bag of frozen peas halfheartedly boiled and strained, a preparation I recommend serving to someone only if you are trying to make it clear just how much you hate them. You have a lot of methods of preparation available to you here. I personally like my peas lightly browned in butter with onions, or cooked into a ground meat curry. You could also do the British thing and rough them up bit and serve them with fish and chips. Whatever you decide to to do with your peas know that there is no good substitute for them in a recipe. Peas are a rather singular ingredient.

BROCCOLI/CAULIFLOWER: Both of these keep exceptionally well and in fact benefit from the destruction of their cell walls. I like to keep these because of their use in curries and soups, but you could also just throw them in a skillet with butter and cheese any day. As with peas, broccoli and cauliflower tend to get a lackluster treatment in American cuisine, but I promise you they’re really tasty if you cook them right (at all). Fun fact: broccoli is a bunch of flower buds. Another fun fact: broccoli, cabbage, kale, kohlrabi, cauliflower, Brussels sprouts, and collard greens are all different cultivars of the exact same plant. 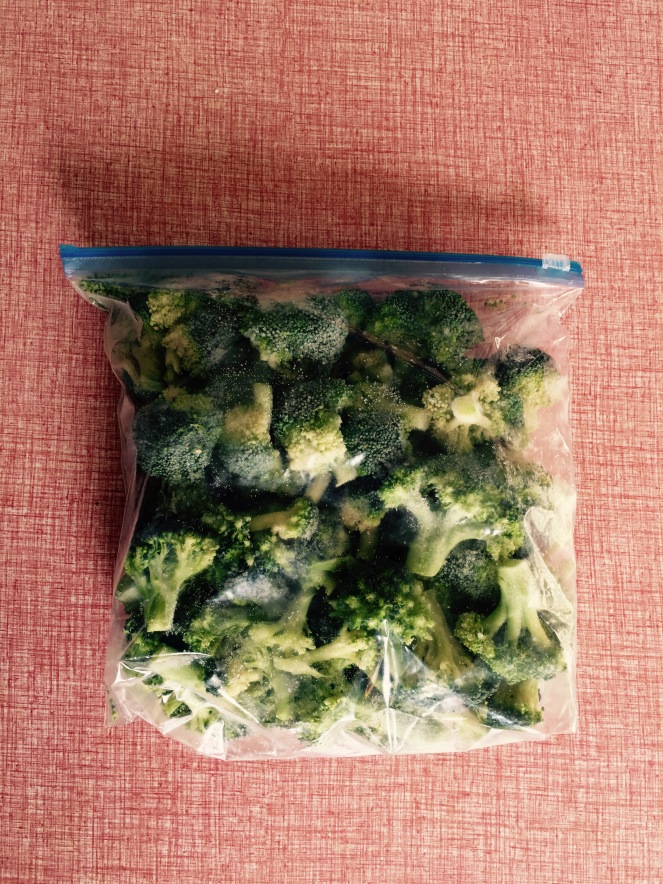 BELL PEPPERS: Fresh bell peppers are great and all, but they go off pretty quickly, frozen bell peppers do not. Just remember the beanie baby test, don’t buy the bag if it’s solid. Bell peppers find a lot of use in breakfast foods. With a quick heating they can be readily added to omelets, scrambles, or frittatas if you’re fancy. I would not recommend frozen bell peppers for salsas of other raw applications.

SOME KIND OF MEAT: Having frozen meat around is generally a good call, it won’t go off in the freezer, and it gives you a suitable last resort if you forgot to go to the store. Chicken takes to freezing pretty well, but ground meat works the best. The texture has already been destroyed by grinding so freezing has less of an impact. If you decide to freeze ground meat, make sure it is pre-formed in the shape you want it, like patties, meatballs, or sausages. Trying to thaw and then shape a big wad of ground meat is a nightmare. As it thaws it will release all its juice, once it becomes pliable it will still be too cold to work with, and most importantly you will have to thaw all of the meat rather than taking a serving or two from the freezer. A final note, always bag or wrap meat in the freezer, as you would in the fridge, because exposure to air will degrade it very quickly.

FISH: Fish freezes very well and often thaws quickly. Having some frozen fish on hand is a good call. Freezing is, in general, a good way to store fish as it goes off pretty fast fresh. A good white fish like sole or flounder is great for a quick meal, provided you have some lemon and butter (you should). Pretty much any fish can be successfully frozen, really, just anything. Salmon loses some flavor, but is by no means a tragedy, and most ocean fish have been frozen by the time you buy them fresh anyway. Certain shellfish also take to freezing like a pianist to childish punch-lines. When it comes to shellfish in your freezer, stick to arthropods (the ones with legs) such as shrimp, lobster and crab. These freeze and thaw really well, bivalves, not so much. Mussels and clams are something you really want fresh, freezing them is a gamble at best.

By this point you should have a great baseline of long lasting staple foods. That would be rad, supes-rad even. Raden out.